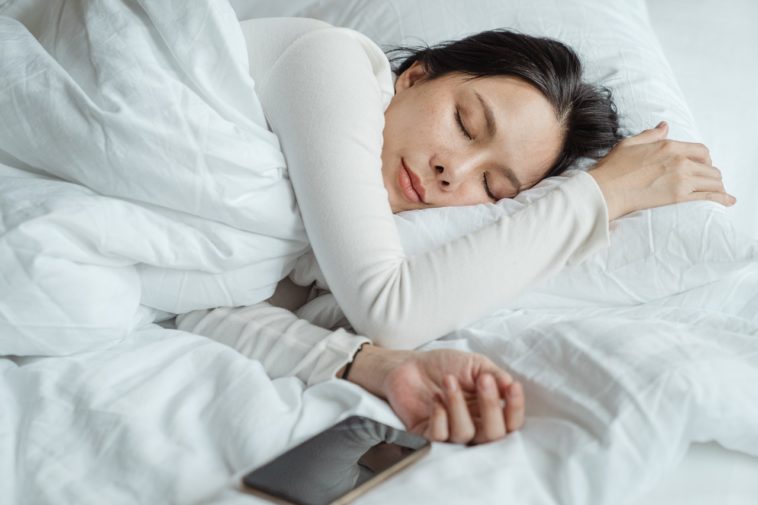 Difficulty falling asleep, waking up at night… One person out of two considers that their sleep quality is poor, mainly women. Fortunately, there are soft solutions to find peaceful nights without medication.

Chemical sleep, induced by taking sleeping pills, has nothing to do with natural sleep. “It is an artificial loss of consciousness, comparable to a light anesthesia, a hypnotic state that does not bring any of the benefits of real sleep,” explains Dr. Patrick Lemoine.

The use of sleeping pills must remain punctual, because taken over the long term, these psychotropic drugs can generate serious undesirable effects. In addition to dependence and addiction, they cause drowsiness during the day, a lack of concentration and an increased risk of falls, and therefore of fractures. Worse: they can generate or aggravate sleep apnea. A study from the University of Bordeaux has even shown that the majority of anxiolytics and sleeping pills (benzodiazepines) have a long-term effect on memory and increase the risk of cerebral degeneration. Swallowing them for more than three months in a row increases the risk of Alzheimer’s disease by 51% in the following years! It is therefore better to rely on natural solutions to snuggle up in the arms of Morpheus.

What are the benefits of sleep?

Many of the body’s regulatory mechanisms are in fact at work during sleep.

1. Hypnosis to calm the mind

Stress and anxiety encourage ruminations and prevent the mind from wandering freely, an essential prelude to natural sleep. Medical hypnosis is a tool of choice to release tension and make peace with oneself. It also allows you to reach a state of total security, necessary for a good quality of sleep. According to Swiss researchers at the University of Fribourg, the time it takes to fall asleep is shortened by one third and the duration of deep sleep increases by 80%.

In practice: two to three sessions are often enough to get back to good sleep.

2. Melatonin to readjust your biological clock

Many sleep disorders result from a desynchronization of the internal biological clock. The production of the sleep hormone melatonin is insufficient or no longer in phase with the day/night alternation and the rhythms of social life. We fall asleep and wake up spontaneously very late. Or, on the contrary, we have difficulty to hold in the evening and we wake up between 3 and 5 am. Taking melatonin orally “allows you to readjust your biological clock, without any danger”, underlines Dr Lemoine.

For more effectiveness, opt for melatonin with an immediate effect: one to two sprays under the tongue (0.5 to 1.5 mg) at bedtime.

Several medicinal plants allow us to deactivate our waking systems. In case of nocturnal or early morning awakenings, valerian and eschscholtzia are recommended because they have an anxiolytic action and restore the sleep architecture. And in case of difficulty in falling asleep due to excessive nervousness, hawthorn and passion flower are better indicated. Take them in the form of infusion (1 teaspoon per cup of boiling water, 3 cups per day) or dry extracts (2 capsules at bedtime).

4. Tryptophan to boost the sleep hormone

This amino acid is essential to the manufacture of melatonin, the hormone which controls the sequence of the sleep cycles. And to optimize its action, bet also on the evening the slow sugars (wholemeal bread, wholemeal rice…) and on the vitamin B (beer yeast, wheat germ…). Tryptophan is found in dairy products, meat and cereals such as wheat, barley, rye and rice, as well as in parsley, pumpkin seeds and soya.

Physical activity for at least 30 minutes before 5 p.m. improves the quality of deep sleep, the most restorative, by 65%, according to an American study by Stanford University.

6. Listen to your body

When the signals announcing sleep appear at the end of the evening (yawning, stinging eyes…), go to bed within 15 minutes. Otherwise you will have to wait for the next cycle to fall asleep naturally, that is to say 1H30 to 2H later.