What causes an ear infection?

Causes of eustachian tube obstruction include:

Ear infections occur most often in young children because they have short, narrow eustachian tubes. Bottle-fed infants also have a higher incidence of ear infections than their breast-fed counterparts.

Other factors that increase the risk of developing an ear infection are:

How to prevent ear infections?

The following practices can reduce the risk of ear infection :

How do I know if my child has an ear infection?

Most ear infections occur in children before they learn to talk. If your child is not old enough to say, “My ear hurts,” here are some things to watch for:

What causes an ear infection?

The ear has three main parts: the outer ear, the middle ear and the inner ear. The outer ear, also known as the pinna, includes everything that can be seen on the outside – the curved flap of the ear that extends down to the earlobe – but also the ear canal, which begins at the ear opening and continues to the eardrum. The eardrum is a membrane that separates the outer ear from the middle ear.

The inner ear contains the labyrinth, which helps us keep our balance. The cochlea, part of the labyrinth, is a snail-shaped organ that converts sound vibrations from the middle ear into electrical signals. The auditory nerve transmits these signals from the cochlea to the brain.

Other parts of the ear can also be involved in ear infections. The eustachian tube is a small passageway that connects the upper part of the throat to the middle ear. Its job is to supply fresh air to the middle ear, drain fluid and keep the air pressure constant between the nose and ear.

The adenoids are small pads of tissue located behind the back of the nose, above the throat and near the eustachian tubes. The adenoids are mainly made up of immune system cells. They fight infection by trapping bacteria that enter the mouth.

Why are children more likely than adults to get ear infections?

There are several reasons why children are more likely than adults to get ear infections.

How does a doctor diagnose a middle ear infection?

The first thing a doctor will do is ask you about your child’s health. Has your child had a head cold or sore throat recently? Is he having trouble sleeping? Is he pulling on his ears? If an ear infection seems likely, the easiest way for a doctor to tell is to use a lighted instrument, called an otoscope, to examine the eardrum. A bulging red eardrum indicates an infection.

A doctor can also use a pneumatic otoscope, which blows a puff of air into the ear canal, to check for fluid behind the eardrum. A normal eardrum moves more easily in both directions than one with fluid behind it.

Tympanometry, which uses sound and air pressure, is a diagnostic test that a doctor can use if the diagnosis is still unclear. A tympanometer is a small, flexible plug that contains a tiny microphone and speaker and a device that varies the air pressure in the ear. It measures the flexibility of the eardrum at different pressures.

How is an acute middle ear infection treated?

Many doctors prescribe an antibiotic, such as amoxicillin, to be taken for seven to 10 days. Your doctor may also recommend over-the-counter pain relievers such as acetaminophen, ibuprofen or ear drops to relieve fever and pain. (Because aspirin is considered a major preventable risk factor for Reye’s syndrome, a child with a fever or other flu-like symptoms should not be given aspirin unless instructed by your doctor.) 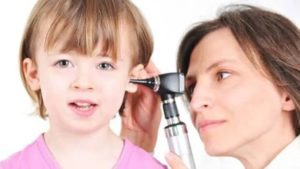 If your doctor can’t make a definitive diagnosis and your child doesn’t have severe ear pain or a fever, he or she may ask you to wait a day or two to see if the earache goes away. The American Academy of Pediatrics published guidelines in 2013 (link is external) that encourage doctors to closely observe and follow those children with earaches that cannot be definitively diagnosed, especially those between 6 months and 2 years old. If there is no improvement within 48 to 72 hours of the onset of symptoms, the guidelines recommend that doctors start antibiotic treatment. Sometimes ear pain is not caused by an infection, and some ear infections can improve without antibiotics. Careful and appropriate use of antibiotics helps prevent the development of bacteria that become resistant to antibiotics.

How long will it take for my child to get better?

Your child should start to feel better within a few days of the doctor’s visit. If it has been several days and your child still seems sick, call your doctor. Your child may need another antibiotic. Once the infection is gone, fluid may remain in the middle ear, but it usually goes away in three to six weeks.

What if my child keeps getting ear infections?

To prevent a middle ear infection from coming back, it’s helpful to limit some of the factors that might put your child at risk, such as not being around smokers and not going to bed with a bottle. Despite these precautions, some children may continue to get middle ear infections, sometimes as many as five or six a year. Your doctor may want to wait several months to see if things get better on their own, but if the infections keep coming back and antibiotics don’t help, many doctors will recommend surgery that places a small ventilation tube (diabolo) in the eardrum to improve airflow and prevent fluid retention in the middle ear. The most commonly used tubes stay in place for six to nine months and require follow-up visits until they fall out.

Can ear infections be prevented?

Currently, the best way to prevent ear infections is to reduce the risk factors associated with them. Here are some things you can do to reduce your child’s risk of ear infections.

What research is being done on middle ear infections? 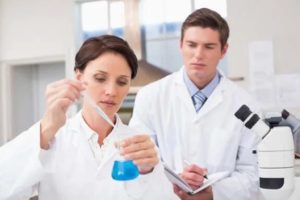 Researchers sponsored by the National Institute on Deafness and Other Communication Disorders (NIDCD) are exploring many areas to improve the prevention, diagnosis and treatment of middle ear infections. For example, finding better ways to predict which children are at higher risk of developing an ear infection could lead to effective prevention tactics.

NIDCD-supported researchers continue to explore vaccines against some of the most common bacteria and viruses that cause middle ear infections, such as Haemophilus influenzae (NTHi) and Moraxella catarrhalis. One team is conducting studies on a possible needle-free vaccine delivery method.

Where can I find more information about ear infections?

The NIDCD maintains a directory of organizations that provide information on normal and disordered processes of hearing, balance, smell, taste, voice, speech and language. (in English)

One of the most common medical problems in children, surpassed only by the common cold and sore throat, is otitis media, inﬂammation of the middle ear. Nearly one-third of all 2-year-olds will have had three or more episodes.

Although usually treated with antibiotics, acute ear infections usually develop without treatment. Doctors disagree about whether long-term antibiotic therapy is appropriate for children with recurrent infections. Although such treatment prevents recurrence, beneﬁces are limited.

The more controversial issue is whether children with chronic ear infections should have ear tubes. The purpose of the tubes is to equalize pressure on both sides of the eardrum, thereby improving hearing and preventing problems with speech development and learning. However, drilling a hole in the eardrum can allow bacteria to enter the middle ear. Research shows that the improvement in hearing only lasts six months and that inserting tubes can actually make hearing worse. Also, since there is no evidence that repeated ear infections cause any kind of permanent problem, tubes may often be inappropriate.

It is suspected that sweets have several effects on the body, depending on the amount consumed and individual sensitivity. Certainly large amounts, and probably moderate doses consumed over long periods, directly suppress the immune system. Sugar can also have an indirect effect, by depleting the nutrients needed to maintain a healthy immune system.

Sugar does not provide vitamins or minerals. Studies show that diets containing only 10% sucrose can reduce the ability to make antibodies by half. Ingestion of refined sugars can also inhibit the ability of white blood cells to engulf and kill bacteria. This effect is greatest about two hours after sugar consumption and persists for at least 5 hours.

Food allergy is probably the most important and most often overlooked cause of ear infections. Since 1942, studies have reported a relationship between food allergy and otitis media. Italian researchers found that allergy causes the eustachian tubes to swell, blocking the excess ﬂuid from the middle ear.

Other physicians found that 78% of 104 children with otitis media had food allergies. Exclusion of offending foods for 11 weeks resulted in significant improvement in most cases. Subsequent problems with suspect foods led to an otitis flare in 66 of 70 cases. This report confirms the impression of innovative practitioners that most children with chronic otitis improve significantly when food allergies receive attention.

At least 75% of children with otitis media improve significantly after eliminating offending foods. The foods that most often cause symptoms are sugar, dairy, wheat, salt, eggs, citrus fruits and chocolate. An elimination diet is usually recommended, with simultaneous avoidance of all common allergens. Usually, symptoms improve or disappear within three weeks. Then test foods individually, monitoring for recurrence of symptoms with each food challenge.

Nutritionists frequently recommend supplements to fight infections and allergies. Zinc, vitamin A and vitamin C stimulate the immune system to resist infection. Vitamin C also has an antihistamine effect (since too much vitamin A or zinc can cause toxic effects, appropriate doses should be prescribed).

Scientific research shows that dietary modiﬁcation, sometimes combined with nutritional supplements, is an effective treatment for most children with recurrent otitis media. Physicians who refute food allergy as a cause of otitis media are ignoring the medical literature. Instead of antibiotics and surgical implantation of the tubes, a nutritional approach provides optimal results.