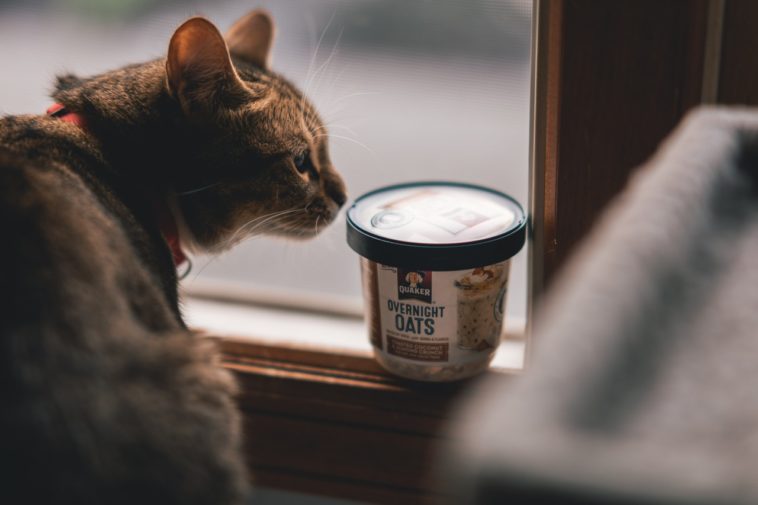 One might think that certain foods, such as tuna for example, are good for cats because they are fish, but this is not true! If he eats it regularly, it can make him sick. Here are some foods which, at first sight, seem harmless, but are real poisons for the cat…

Before we list the prohibited foods for cats, let’s first look at what foods a cat really needs. As pure carnivores, their diet consists largely of protein, a moderate amount of fat and a minimal amount of carbohydrates.

Therefore, the main component of cat nutrition should always be high quality meat. It should represent at least 75 to 80% of his food bowl. However, feeding it exclusively with pure meat is also unhealthy for the cat.

In the wild, cats eat their prey with skin and hair or feathers. In addition to the meat, they also absorb other components and thus ensure a balanced ratio of nutrients and fiber and good digestion.

The important thing is not to give your cat cereals to eat, no cake, bread, cookies; however, many commercial kibbles contain them and sometimes as the main ingredient. So if you don’t want to poison your cat, look carefully at the ingredients on the labels and also avoid giving him the following foods. Here is why…

Every pet owner should know that chocolate is harmful to animals. However, children, for example, might be tempted to give it to your dog or cat. What can it do to him? The purine alkaloid theobromine contained in cocoa beans can, in the worst case, cause the death of the animal. The toxin is excreted only very (too) slowly by the animals and can accumulate in the blood. The first symptoms of intoxication can appear after only four hours. The higher the chocolate content, the higher the risk of poisoning.

As soon as the first symptoms of poisoning appear, you must act quickly. Starting with indigestion, symptoms such as diarrhea, vomiting and high blood pressure appear. A swollen belly and agitated behavior of the animal, aggravated by convulsions, are signs of theobromine poisoning. Severe cardiovascular problems can eventually lead to death.

Cats love tuna. What few people know, however, is that tuna can be unhealthy for cats. This type of fish contains methylmercury and this can be harmful to health. However, this doesn’t mean that cats have to go without their favorite food. If your cat occasionally eats a small portion of the fish, it is harmless. Eating larger amounts can lead to kidney problems or even liver, heart and eye disease.

If you occasionally feed your cat tuna, be sure to use products from pet stores. Canned tuna, which is suitable for us humans, contains too much salt and spices, which are also harmful to the animal.

What is totally harmless and commonplace for us can be “pure poison” for our animal roommates. This is the case with leek plants. These include the kitchen onion family as well as chives and garlic. Even small amounts of the plants can cause symptoms of poisoning. It doesn’t matter if the cat eats the leek raw, cooked or dried. The risk of poisoning is due to sulfur compounds that destroy the cats’ red blood cells.

If the animal vomits or suffers from diarrhea, these may be the first signs of intoxication. Due to the reduction of red blood cells, the animal suffers from anemia. In addition, the cats respiratory and heart rates are often increased, mucous membranes are pale and urine becomes dark. In the worst case, the animal dies of poisoning.

Fortunately, this is not the type of food that a cat would throw itself on at first sight!

There are now cat owners who are adept at BARF, meaning “feeding them raw meat”. However, they should avoid pork. By eating meat, there is a risk that the cat will become infected with the Aujeszky virus. In most cases, the viral disease is fatal.

The causative agent of Aujeszky’s disease, transmitted by infected pigs, is one of the herpes viruses. If the cat ingests the viruses through its food, they first migrate to the gastrointestinal tract. From there, they enter the animal’s brain. In the brain, the viruses destroy nerve tissue and this eventually leads to rapid death.

The following symptoms may occur with Aujeszky virus infection:

Did you know that liver contains a lot of vitamin A? If a cat consumes too much vitamin A, bone problems, symptoms of paralysis, kidney damage and joint changes can occur. This is because fat-soluble vitamin A accumulates in the cat’s kidney and liver tissues, causing tissue damage. In severe cases, vitamin A poisoning can even lead to death.

If you prefer to feed your cat raw (BARF), you should make sure that the liver is no more than 3-5% of the meat.

Fruit is healthy for us humans, but it is not a part of a cat’s diet. In particular, stone fruits, grapes and raisins should not be in the pet’s bowl. Stone fruits such as plums, apricots and peaches contain toxins that can turn into hydrogen cyanide. As a result, cats may experience typical symptoms of poisoning, such as nausea, vomiting, palpitations and breathing difficulties.

The cat should also avoid grapes and raisins. An animal’s sensitivity to grapes varies and depends in part on the amount and body weight. Symptoms such as loss of appetite, stomach pain and diarrhea may occur after consumption. Severe poisoning even damages the kidneys of the animal family member.

Can cats drink milk? – This is a question that concerns many cat owners. Unlike adult cats, kittens can still digest milk well. That’s because they produce the enzyme lactase while they are drinking breast milk. As they grow, lactase production is reduced and intolerance occurs.

The side effects of this intolerance can be indigestion, flatulence, diarrhea and abdominal pain. Liver damage, obesity and dental problems can also occur as a result of taking milk.

Avocado is a popular superfood because it contains unsaturated fatty acids and many vitamins. This may make it healthy for humans, but not for cats. In addition to vitamins, the fruit also contains persin, a substance that has a toxic effect on animals. If the cat eats an avocado, the resulting poisoning can eventually lead to death.

After consumption, the cat may experience symptoms such as shortness of breath, coughing, ascites and subcutaneous edema. An increased heart rate also indicates poisoning. This often results in heart failure. Poisoning is difficult to treat, which can result in the death of the animal.

Not only should cats keep their paws off raw potatoes, but so should humans. The nightshade family contains the toxin solanine, which is found primarily in the green areas of the potato. This is dangerous for animals and humans. Once cooked, potatoes are no longer dangerous, but you must be sure to discard the cooking water. This is where the solanine builds up. Our meowing animal housemates are already showing symptoms of poisoning if they eat only a small amount of raw potatoes.

The symptoms by which you can recognize your cat’s poisoning are vomiting, diarrhea and disorientation. But stomach cramps and confusion can also afflict the pet in an emergency.

What often leads to flatulence in people is cabbage. The same applies to cats, because they can not digest both cabbage and legumes. This also causes flatulence in animals. In the case of legumes, beans, peas and lentils, for example, contain toxins such as phasin. If purring housemates eat the fruit, the following symptoms may occur:

Unlike dogs, cats are more demanding when it comes to food. However, they can still enjoy stealing food from their owners. Young cats in particular are always very curious and like to try something new. Therefore, it is advisable not to leave any leftover food on the table or counter. Alternatively, you can put a lid on the plates. Also, be aware that an animal can digest its own food better and cats are not allowed to eat everything that is suitable for humans.

In addition to the foods mentioned above, salt, alcohol, carbohydrates, yeast and coffee are also bad for animal housemates.